Chef Deb Paquette is truly one of a kind. A 30-year fixture in Nashville, she’s a renowned female chef in a male-dominated field. She became the first woman in Tennessee to qualify as a Certified Executive Chef, after graduating from the Culinary Institute of America, .

She is exuberant and unfiltered. When we approached Chef Paquette about inclusion in our Operator Corner blog series, her first question was, “do I have to act civil?” We assured her, no.

Our Chef Barry Yates sat down with Chef Paquette for a lively conversation (conducted virtually, in these pandemic days). She proved she is not only a highly accomplished chef, she’s also a colorful conversationalist.

A Strong Woman in a Male-Dominated Field

You are a very strong woman in a male-dominated field. How did you get where you are? What kinds of things did you face? Do you have advice for other women in the culinary field? Just go, because you’re amazing!

Well, first of all, I got where I am today by having bigger balls than most men! This means I had to assert myself and realize I could not be like the lion, the tin man, or especially, not that haybale of the scarecrow…I had to be Dorothy. Determination was my state of mind and I was going to be the human sponge.

I found out about culinary school and somehow it was my calling…I am a bit crazy, a wacky sense of humor, not afraid to work, hyper, big mouth, and wore two different-colored socks. It turns out I was a perfect candidate to be trained for a professional position in the culinary field! (I did show some promise!)

The kitchen world drew the talent out of me that was just waiting to be expelled from my brain. I made the best choice ever, and those colored socks took me to places beyond what I imagined (plus a few trips to hell and back!).

What you experience in your early days and what happens years down the road can be like playing pin ball. Well, that’s really what life is! Never stop educating yourself and create a great management style (mine is organized chaos!). If you do not have a great sense of humor, start listening to Bill Cosby albums, know the rules, love to clean, and love to cook! 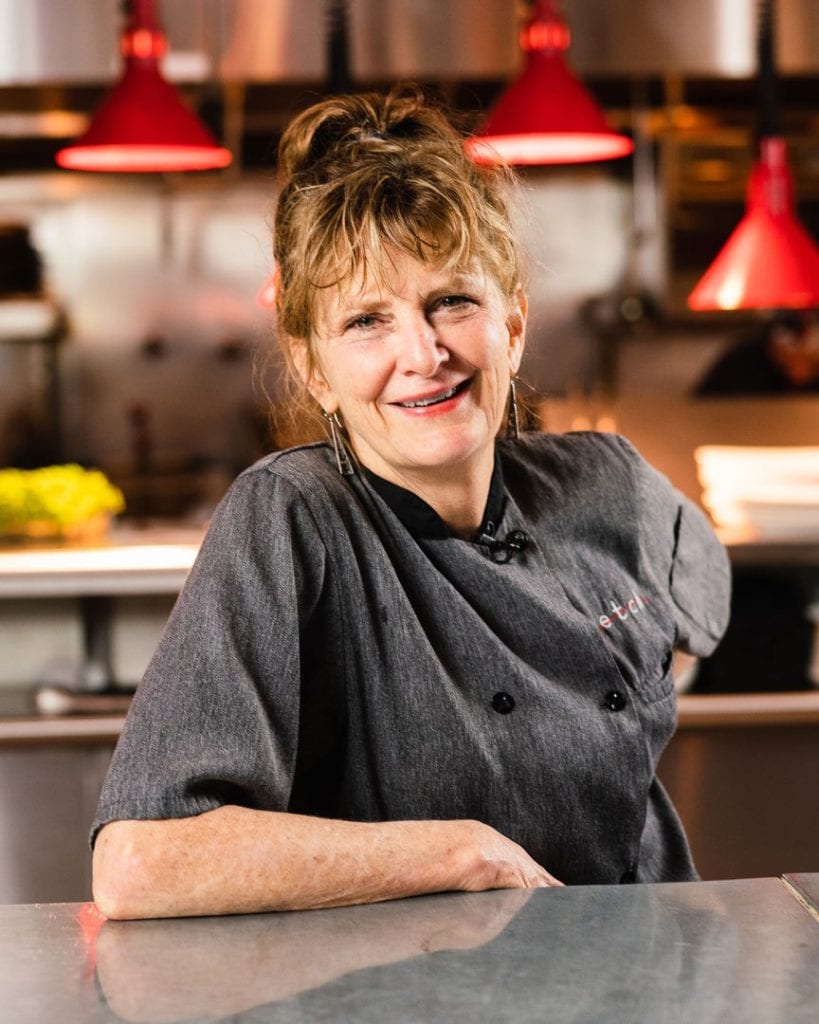 What I faced early on was the incredible human library of people that I wanted to (and would get to) know and learn from. OMG! My first job was as a dishwasher at the “Cottontail Lounge.” This was a man bar where waitress’s uniform skirt stopped at the bottom of their butt and frilly ruffled panty things were the undergarment! The first day of my job, it was 10 A.M., and I ran into an all-night drinker, who happened to be the owner. He stumbly told me not to worry, he did not want to f***k me! “Okay,” I said and asked where the kitchen was. (He was sleeping with the only waitress that had 44 double-Ds!)

After working there for months, I knew my world would hold lots of fun, and lots of sweat! I also knew I would face other gents like “RAY,” and I would deal with it as best as I could! Food was on my horizon.

I worked with many strong men. Many were awesome, and then there were the d*ckheads. No man sh*t was going to step on my yellow brick road. There are no tragic stories, just sh*t that happens when men need to get their own way. I was not a promiscuous person, so I had no desire to put my two legs out with a rent sign on them…therefore, I never became an interest or an interesting story. Having a boyfriend, and then a husband, kept potential douchebags from advertising their stuff!

As I stated before, there were few issues with man-agers. Here is his story. Icky man wanted me to go on the road with him and open a few restaurants. I happened to get pregnant, and his decision-making process altered. Fate changed, and I lost the baby. When I returned to work, he fired me and didn’t want me coming back to work because I would likely get preggers again. I sorta understood, and I was not angry until my manager told me that the “piece of sh*t boss man” wanted to offer me an abortion so I could continue working. D*CK!!

I let this pass and realized I was not the problem!

There are Still Nice Guys

So, no one thinks I am a man basher, here’s a better man story for you. A banquet dude ran into me at 5:30 A.M. getting ready for a big breakfast. I had not put my Farrah Fawcett beach hair up under the white pain-in-the-ass toque, did not have my ugly oversized white chef’s coat on, but did have on my ugly JC Penney brogans.

He took one long look and left the cooler! I was thankful for him leaving, ‘cause I was pretty sure he was in there to play with the whipped cream cans! He went back to the banquet hall and asked all his dude pals who the new girl was. They told him there is no new girl, it is probably Deb, the banquet chef. His reply was “you mean the lesbian?” He asked me out that night, and he is now my husband! Turns out, he liked my boots!

She’s a pretty seductive redhead, just so you know.

Whoa! Thanks Barry! Don’t have those cataracts removed!

Now that we are done chatting about woman caca in the man world, let me just say that I do know quite a few love stories that came out of couples meeting on the job. Hookups with work “buddies” are sorta natural. You find certain peeps spending a bit too much time in a supply closet, or one of the hotel rooms, or maybe a locked office! And bless my mother’s ears, I just about froze in a walk-in cooler one night!

Not much else to share. In the past 20 years I have worked with, and for, many wonderful men.

That’s refreshing. I think you’re right. I have a lot of friends in the business, a lot of longtime chefs that are female. And a lot of them don’t have that to say, so it’s refreshing to hear you say that. I’m glad that’s the case.

You have to be a hard-core insider to understand that you might face problems, but you don’t have to create problems. Ya just do your job. When I was accused of being a brown noser, I’d first say, “you are full of it” and then say, “have you seen the walk-in? You’re not going to go in and clean it, because you’re f^*king lazy. So, I will clean it! And I might even get a gold star on my forehead, and you won’t!” (But I do love cleaning walk-ins!)

The walk-in has been my office on many occasions as well as my therapy room. It’s the coolest place to go…ha!

My first chef that I worked for was Ferd Grisanti. A real feisty Italian, right? One of the most lovely people in the world. He thought that if he took one of us into the walk-in and blasted us, that no one else could hear. Right? It didn’t matter if it was one of his own kids, or one of us; when he said, “we’re going to the walk-in,” we knew we were in for it. But the whole kitchen heard it too. It was pretty funny.

After years of cheffin’, some of my past employees come into the back of the kitchen and ask my cooks jokingly, “has she taken you to the dining room with a glass of water?” The joke was that if I have a glass of water in my hand and called you to the front of the house, there was a good chance somebody was in trouble! There was some truth to this!

Speaking of the walk-in, it’s terrible to say this, but when I get really frustrated, I call it the Helen Keller. I go in the walk-in, and hold my arms up high, and grab my fists. Put all the pressure from my brain and body into my fists, hold them above my head, and I squinch my eyes as tight as I can and silently scream. I know that’s cruel, but I’ll tell the kids, when you’re upset, you’ve got to go into the walk-in and do the Hellen Keller as hard as you can for ten seconds. And when you’re done, your life’s better.

Can You Do Roast Beef in a CVap® Oven?

Part Two: Working her way up